Every successful sports team spends hours preparing for their big day. Teamwork is crucial to their success and was evident in our stops at the various NASCAR shops today. I understand not everyone sees NASCAR as a sport and I’m not sure I really appreciated it much before either, but asking questions and hearing more details today and yesterday changed my mind.

I guess if you can get all the combinations right as far as teamwork and chemistry and cars, engines, reliability and things like that, then good things happen. – Ryan Newman

Our first stop was Penske Racing. Their shop had the best view of any we visited. There was an open “fan walk” that overlooked the final stages of the process to prepare a car for race day.

The black tent below is where they measure the specs of the car to make sure it meets the requirements for racing.

They moved the #12 car from the spec tent and where preparing the #2 car to enter.

The next race is Saturday night at Kentucky Speedway. We arrived in time to watch them make final adjustments to the actual cars they will race on Saturday. 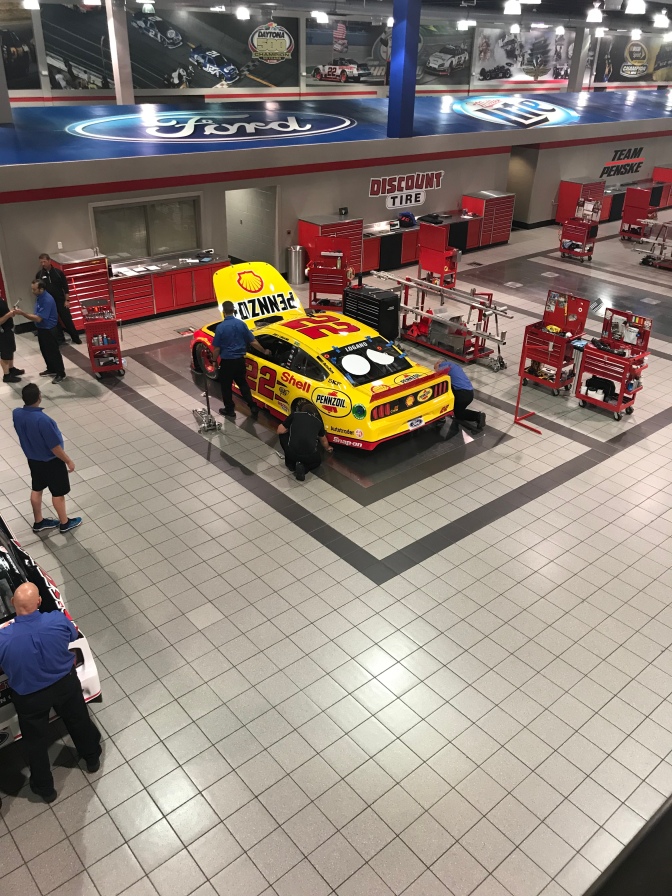 They take two identical cars to each race. It was cool to see both of those cars side-by-side before they were loaded. 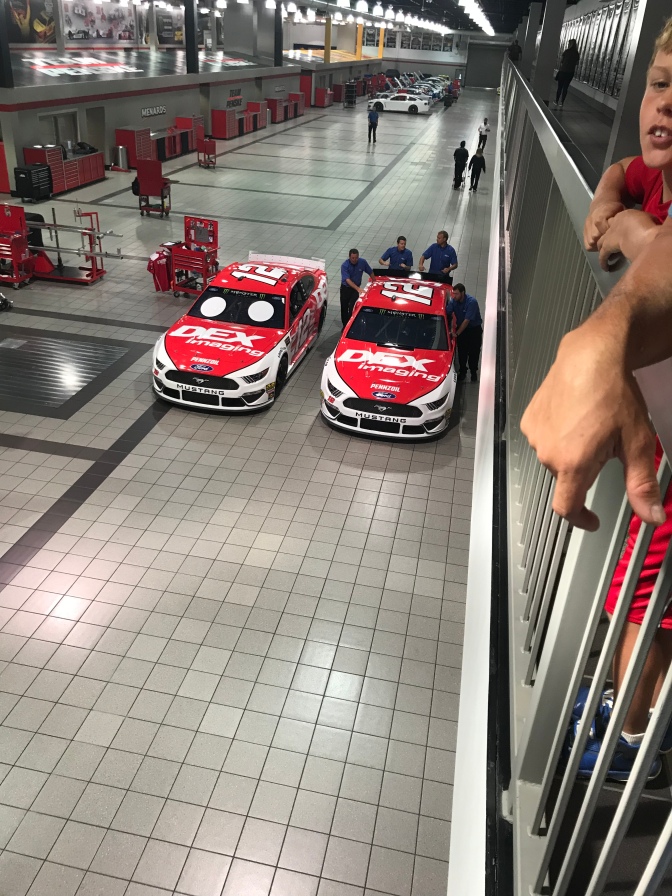 We even got to watch the crew load both of those cars into the hauler.

The lady working in the gift shop was very knowledgeable and took the time to share information regarding the logistics of the teams travel to the races. For example, she pointed out which members of the crew travel with the car, what their roles are and when the pit crew typically arrives, etc.

Next, we headed to Joe Gibbs Racing. The viewing area here wasn’t as great so I don’t have any pictures from this stop.

After lunch we stopped at Roush-Fenway Racing where we visited the shop and drove a computerized simulator. Each shop/museum has a winning car on display. Typically, these cars are not cleaned off so you can still see the dirt, drink residue and confetti stuck to them!

The picture below is from the shop at Chip Ganassi Racing. (The lighting wasn’t great, but it is the best picture I have.)

At Stewart-Haas Racing, we were able to see a room full of CNC machines where they manufacture their parts. The picture in the car below was the 2017 winner at the Dayton 500. The winning car at Dayton is displayed at the track for one year and one day after the race before being returned to the owner.

We knew we only had a little bit time before the shops closed for the day so I searched for one close by and we happened to be near Ken Schrader Racing. Although this shop doesn’t have any current NASCAR, it was probably our best stop of the day! For those who aren’t familiar with him, Ken started out in quarter midgets and is now retired from NASCAR.

Ken’s wife, Ann, opened the door and let us in the shop to look around. She was the sweetest lady and told us all about his history – especially when she figured out we knew some of the same people. The owner of one of the cars he raced was friends with Nick’s grandpa!!! How neat is that? 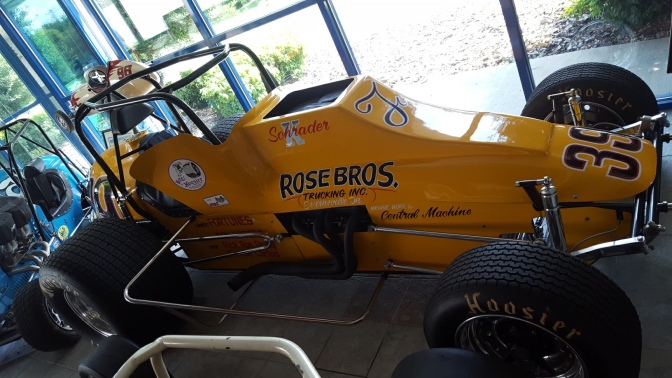 The trophy below is the Silver Crown Championship Series in 1982 and the photo next to it shows the car above in the winning race. 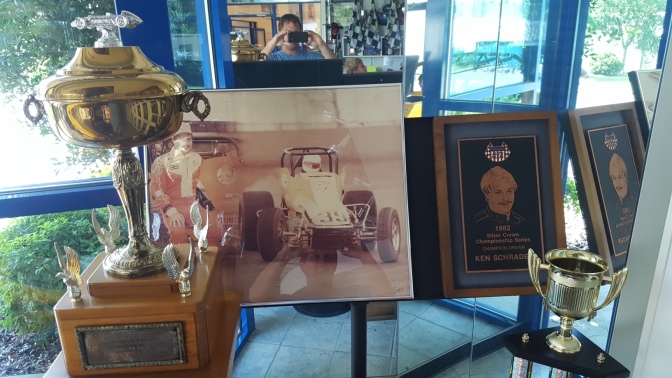 Both of the boys got to climb in some of the NASCARs Ken raced! 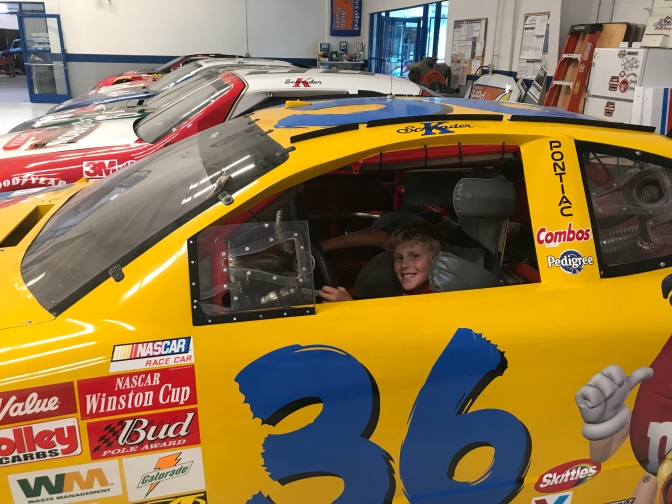 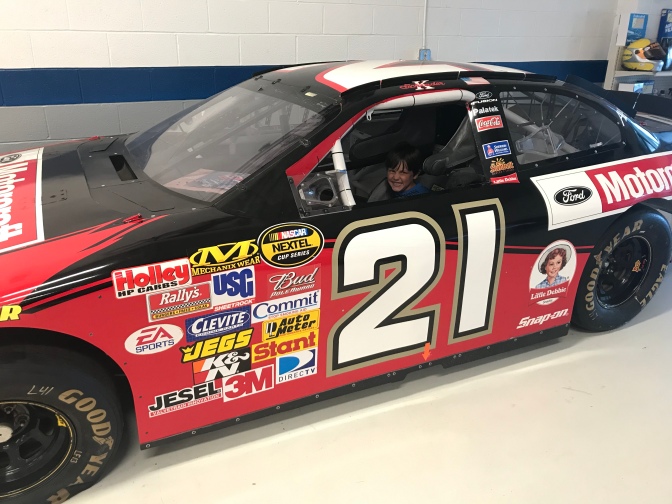 Below are some of Ken’s past cars…

He still races ARCA races so we had a chance to look at a few of those as well.

They also had his dad’s old wrecker in the shop and the boys were able to sit in it too.

As we continued to talk to Ann, she gave us great ideas of things to do before we leave town and showed us Ken’s racing schedule for his upcoming ARCA races. She even gave us her card and said to let her know if we decided to come to a race in IL this fall to meet them!

In addition to teamwork, other traits that are abundantly clear among NASCAR are the charitable nature and the down-home personality of the teams. Many of the workers have gone out of their way to wave, say hi, talk to us, give us tips, etc. Many have their own foundations to support various charities, hospitals and children’s causes.

When we returned to our campsite, Levi drew a couple of the cars we saw. Notice how he used lug nuts from the cars to hold down the corners. 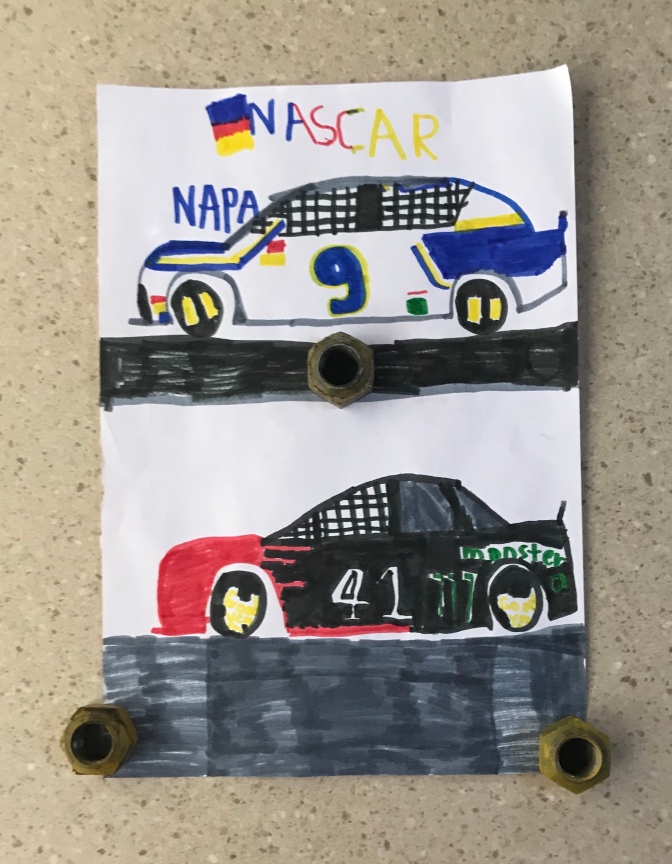 After a day full of activities, we spent the evening relaxing at the camper.

2 thoughts on “Behind the Tracks”