Today was our last day in the Charlotte, NC area before we head back to Southern Indiana. We wrapped up our NASCAR experience by visiting the NASCAR Hall of Fame in Downtown Charlotte.

They had a “Summer Tune-Up” activity going on where kids could participate in activities to earn ribbons and stickers. The activities also included a scavenger hunt through the building. One of the first activities they did was to make a balloon car. Nick and I were deemed their mechanics!

Next we watched a short video on the history of racing before exploring the rest of the museum.

One of the first exhibits you come to is a display of 18 cars from various time periods shown on a track. The track is marked with degrees of banking along it to simulate the various tracks. We spoke with an employee who explained that everything in the museum is on loan from the owners, including the cars for this display. The museum closes for a week when it is time to rotate the 18 car display due to the complexity of maneuvering the cars in such a design.

You can’t see it from any of our pictures, but there was a neat display on the floor showing lines drawn in the direction of every NASCAR track with a marker showing the mileage to that particular track. As the crow flies, Indianapolis Motor Speedway is about 460 miles or so from the museum.

Below is a picture of the boys with one of Richard Petty’s earlier cars. 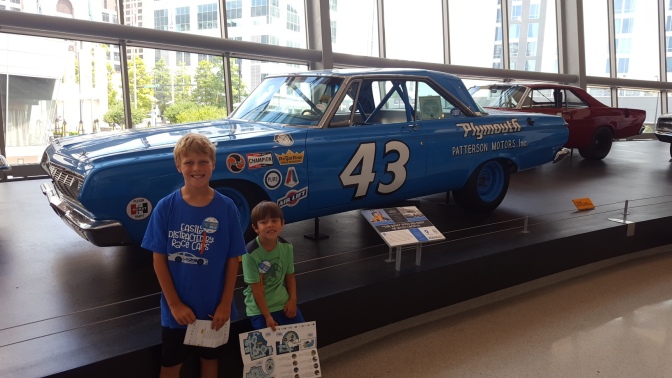 There were several areas to experience different parts of racing. The picture below shows the pit stop practice where you are timed jacking up the car, changing a tire and fueling the tank. To give you some perspective, a pit crew is typically in the 12-13 second range for a pit stop. Nick and I completed the activity by ourselves first and had a time of 15.32 seconds…the fastest of the day for adults so far. (The time in the picture was from a group before us.) Next, all four of us took a turn together and completed the challenge in 13.52 seconds…fastest time for a family for the day. I think we have a new career ahead of us – assuming the driver only ever needs ONE tire replaced and the fuel is hanging on a stand that fits perfectly into the tank! 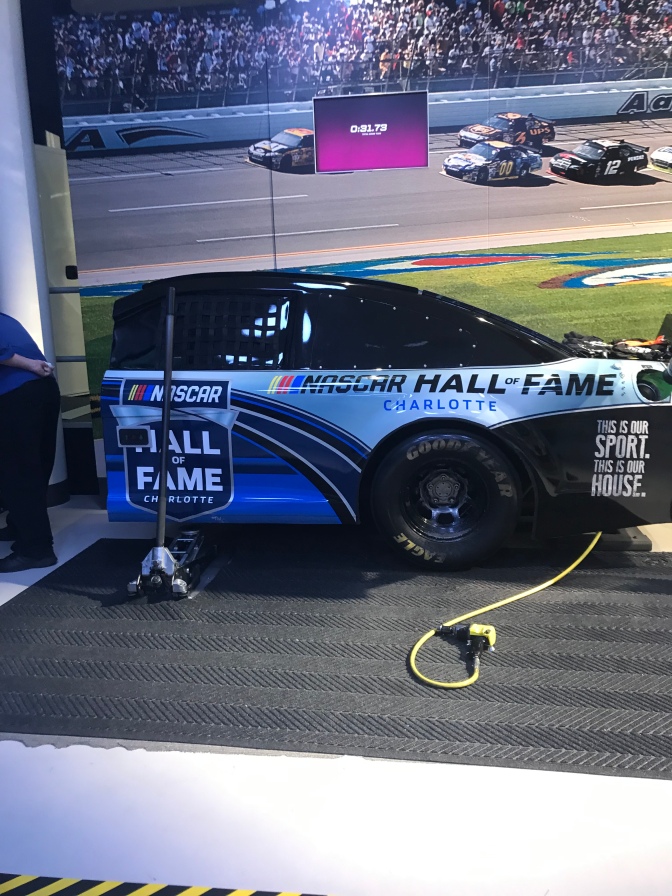 Another activity the boys did was to announce a race. It was fun to listen to them describe just what was happening.

The museum had a life-size version of Lighting McQueen. This is only one of two ever made with the other on display at Disney.

Another activity included a simulator of a race at Kentucky Speedway. First, you attended qualifying to become familiar with the cars controls and then you raced against 15 other people. Emmitt wasn’t tall enough to drive on his own so he sat on my lap while we “raced.” We came in 2nd place! Nick and Levi both finished a lap down in 5th and 6th places. The next picture shows Levi waving the checker flag with the simulator cars below him.

In addition to newer NASCAR items, there was a lot of history included throughout. There was even a section dedicated to the first days on the Daytona beach and outracing the law in the days of moonshine.

One final picture before leaving the museum…

The John Force zMAX Dragway is also part of Charlotte Motor Speedway. They were supposed to have street car drag races tonight, but unfortunately those were cancelled due to a potential storm. We were disappointed because we hoped to get in one last race before leaving this town, but the weather just didn’t work out in our favor. While we were waiting to hear about the status of the races, we met someone local who brought their car to race tonight. He let us in the car trailer to take a look at the drag car so it wasn’t all a wasted trip to the track.

We also stopped in at the Camping World store which is located right next to the track. It is always fun to look at the new camping accessories. We have had most of our camping accessories for 8 or 9 years now so I’m sure we will have to start replacing things soon.

Afterwards we made a stop for fuel and headed back to the campground. With 84 gallons of fuel, we shouldn’t have to make any fuel stops for the 560+ mile drive home. The rest of the night will be spent packing up for our early departure in the morning.

One thought on “Hall of Fame Day”