It’s been a while since I’ve posted. Life’s been busy with work, back to school and fun with friends! At the end of August we spent a relaxing weekend camping at Scales Lake with friends. Labor Day weekend was pretty low-key and included nights of playing Euchre with our neighbors and Nick’s birthday dinner with the Cranes.

I know this blog is called Grahams Go Camping but for this post we went to the races. Levi’s birthday was earlier this summer and his present included tickets to the Brickyard 400 in Indianapolis, IN. He was so excited and didn’t seem to mind the wait to actually enjoy the event.

We arrived in Indianapolis Saturday afternoon and checked into our hotel. Levi chose the restaurant for dinner – Pizza King. Pizza King is popular at home so we expected much the same; however, when we walked inside we knew it was different. Each booth included an intercom to place your order and a window with a train that was used to deliver your drinks!

Sunday morning we started the day with breakfast at the hotel and then made our way to the Indianapolis Motor Speedway.

Levi bought a few cars to add to his collection.

Our seats had a great view of the Start-Finish line and Turn 1. First up was Qualifying. Below you can see the cars waiting to take their turn around the track. The slowest car still exceeded 174 MPH…whew!!!

After Qualifying Levi and I took a walk to the infield. The bricks that make up the Start-Finish line extend into the infield which made for a great photo op. 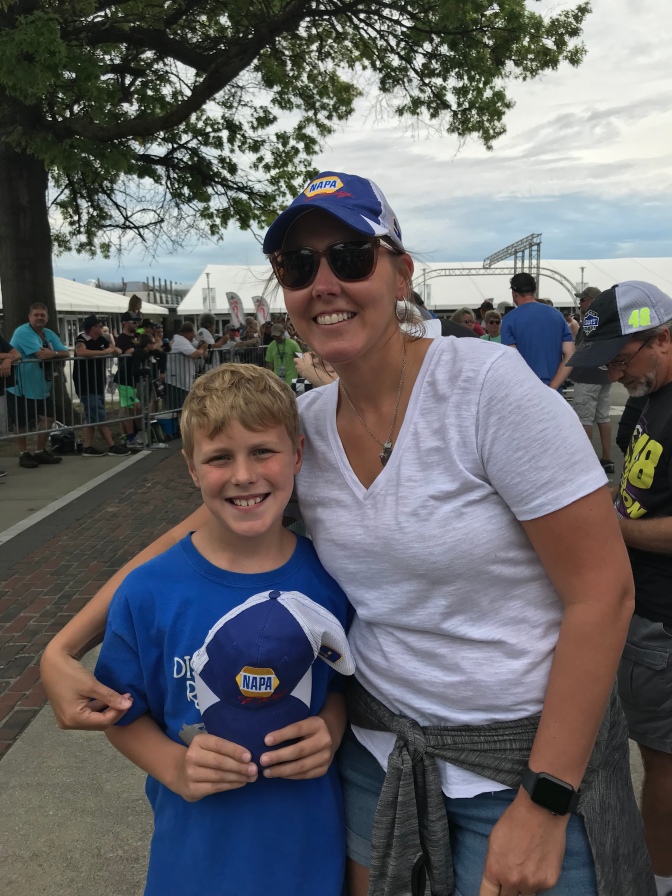 We weren’t exactly sure why people were lined up next to a row of gates but quickly figured out that we were next to the Driver Walk! We had front row “seats” to see the trophy being delivered to the track.

(I’ll go ahead and warn you now that I got a little picture crazy at this point.)

Florida Georgia Line had a concert the night before. We didn’t go, but had a close-up of them before the race.

The President of the Indianapolis Motor Speedway took the time to sign autographs and stopped to give Levi a pin. 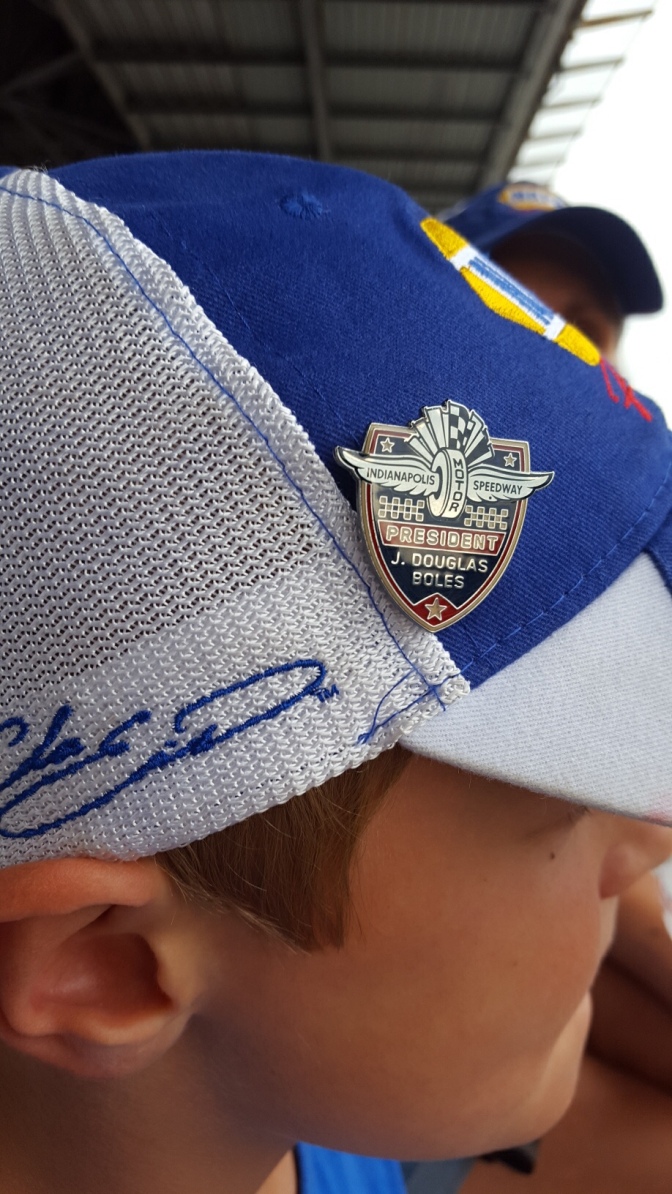 Several other drivers passed through and signed Levi’s ticket or gave him a fist bump. He was so excited! 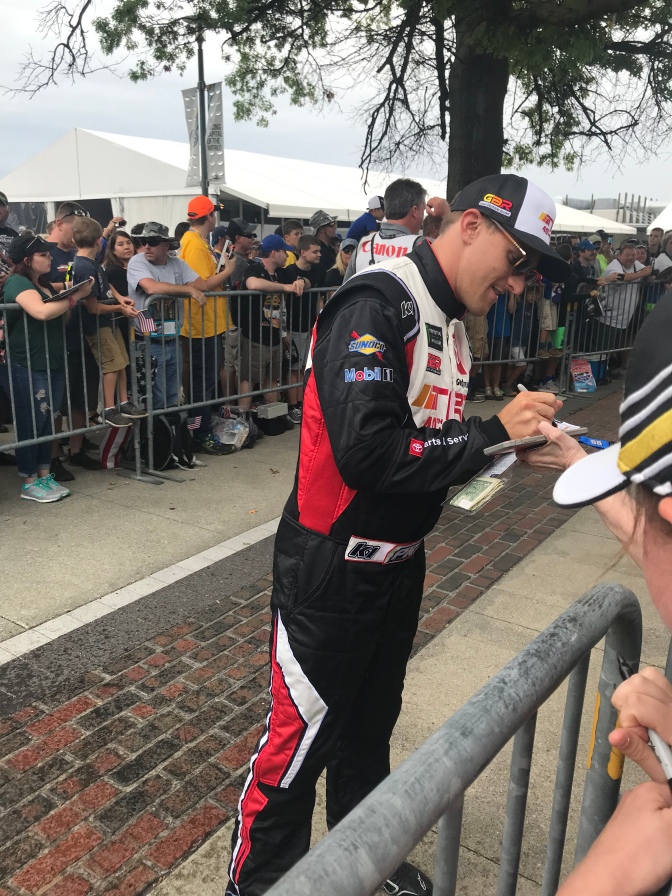 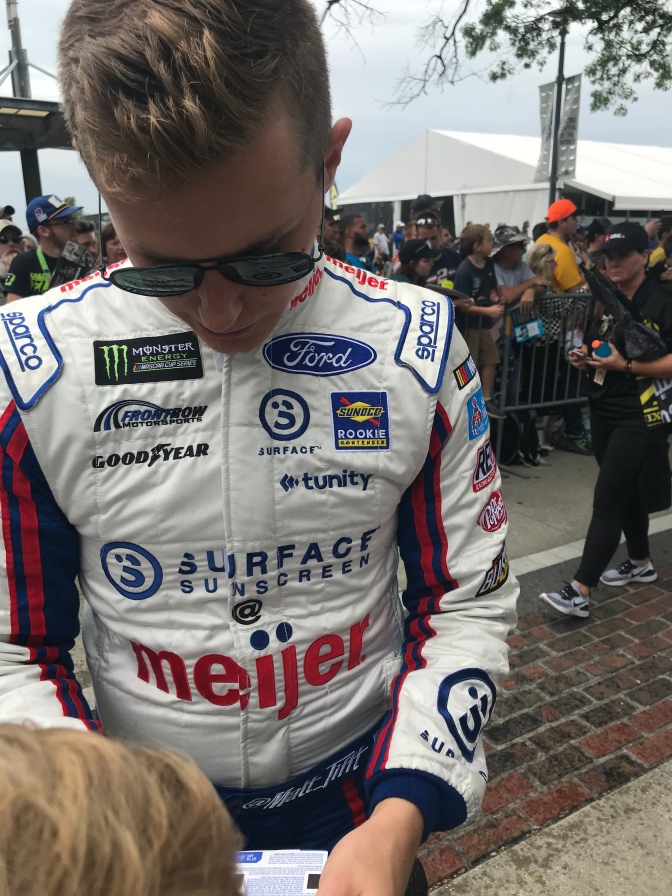 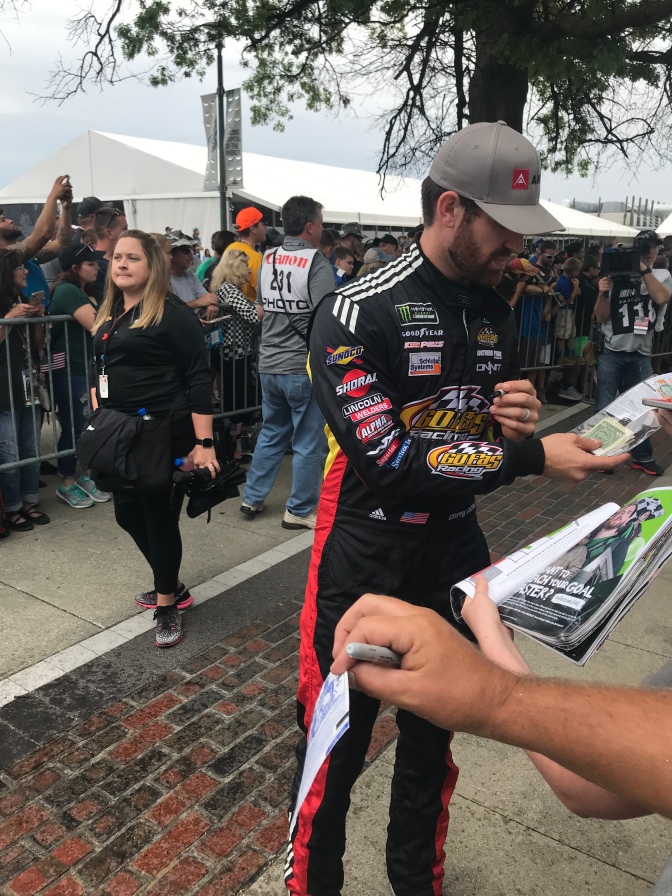 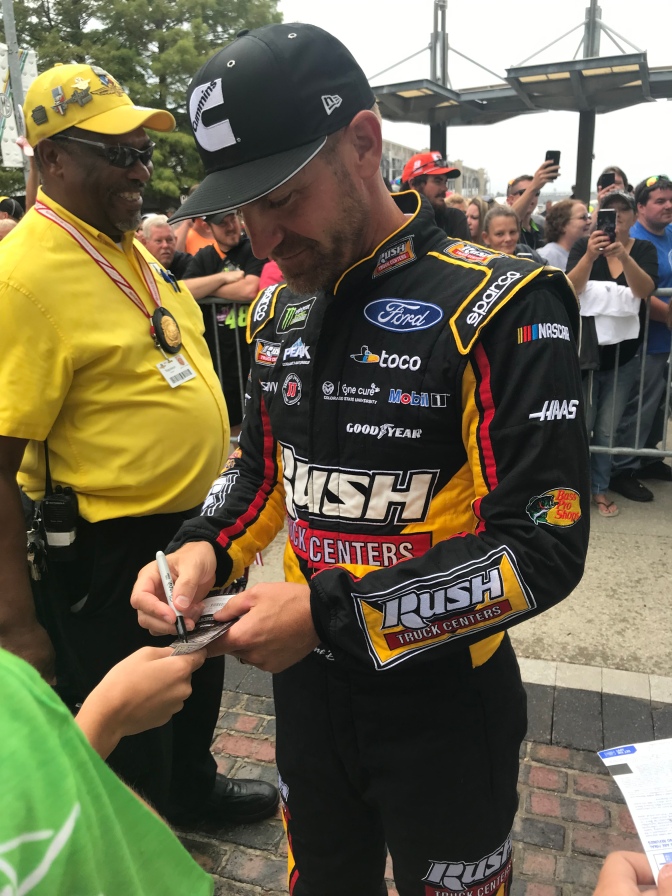 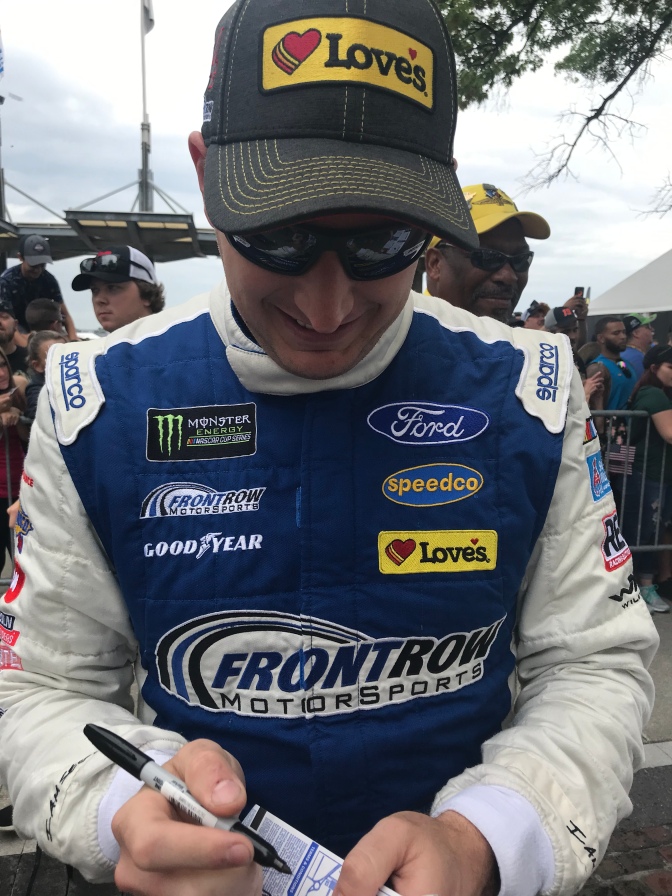 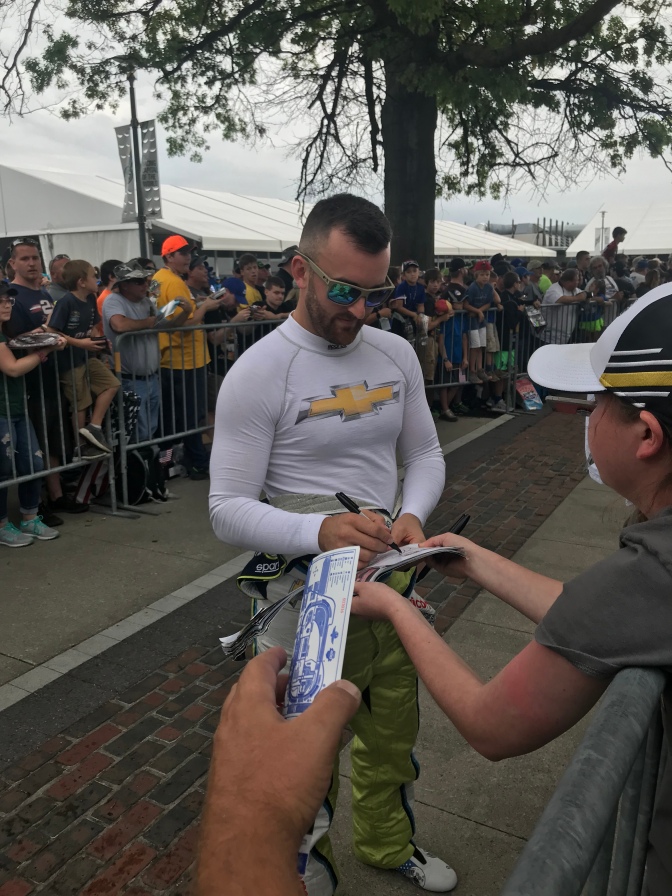 But the best part came when his favorite driver, #24 William Byron, paused for a selfie! We were so close to him it was hard to get Levi in the picture but William let us take a few tries so we came up with something that was better than nothing… 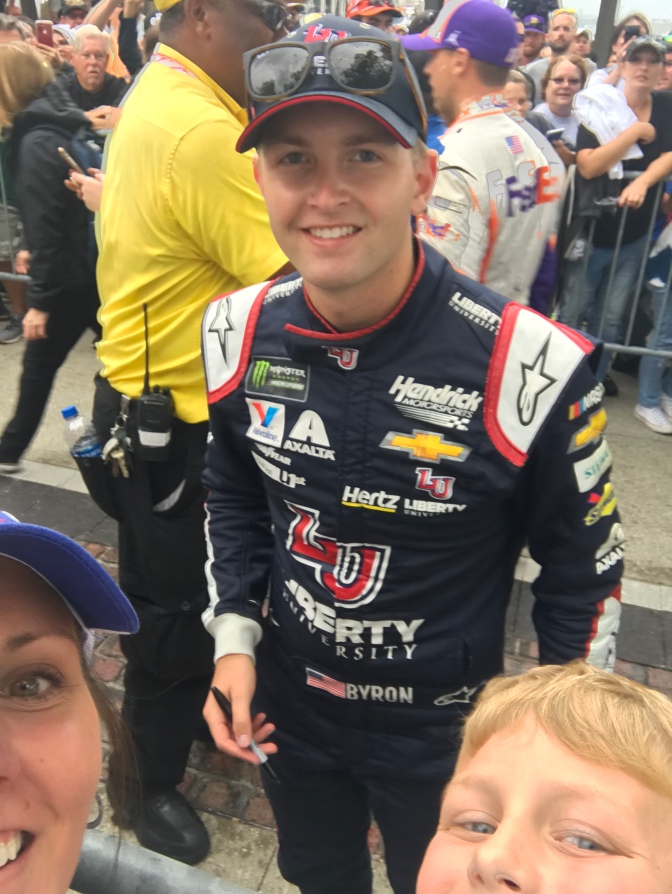 Although you can’t see Levi’s actual smile you can tell in his eyes he is THRILLED!!! All this excitement and the race hadn’t even started yet.

For most of the race we sat on the front stretch directly across from the entrance to the garage and a big screen. The tower with Mountain Dew in the picture below is the tower where they update racers’ field positions. We also had a good view of the pits for Levi’s favorite drivers. 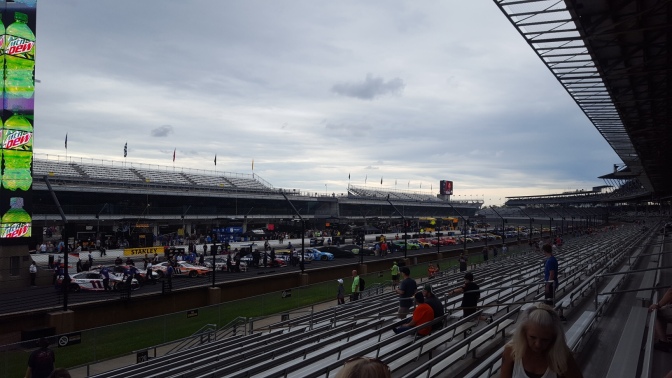 The tickets we had allowed us to move between a couple of different sections so for about 30 laps we moved between Turns 2 and 3. Just before we moved to this spot, there had been a wreck in Turn 3 so all cars were stopped. Look who was stopped in front of us…

Before the race was over we headed back to our original seats so we had a close-up of the drivers crossing the finish line.

Kevin Harvick led the most laps of the race and finished in first place. Levi was happy when William Byron squeezed into 4th place right at the end. My driver, #9 Chase Elliott, finished 9th. Nick didn’t pick a favorite to win, but he was a “kid at heart” today too.

This was the best birthday present! – Levi

One thought on “Grahams Go To The Races”